Posted on February 3, 2017 by Brittany Clarke Tangent: Alternatively salicylic acid was first discovered in the willow bark, which is also called the “headache” tree, was discovered by Hippocrates around 400 B.C.E. by chewing on it to relieve pain and for fever relief. Native Americans used willow bark in tea for headache and rheumatism.

Green tea’s prominent constituents are polyphenols (GTP) that help in COX-2 induced arthritis (1999 study, Proceedings of the National Academy of Science). Other constituents for pain relief include: flavan-3-ol derivatives (polyphenol), apigenin (chamomile also contains this), and around 50 other anti-inflammatory compounds. Drinking green tea long-term can prevent ulcers that might otherwise be triggered by NSAID use (it contains 15 anti-ulcer phytonutrients). In the previous post, Celebrex and Vioxx were mentioned, and while they are called “safe aspirin” they do not prevent ulcers. The actions in green tea promotes wound healing while also preventing ulcers.

The most researched health benefit of green tea is its anti-cancer properties. Cultures who drink it regularly have much lower rates of cancer than other developed nations. In a Mayo Clinic study, “green tea not only inhibited cancer cell growth, but cancer cells exposed to green tea began to show nuclei fragmentation and other signs of apoptosis.” EGCG, a polyphenol found in green tea, is the constituent known as the most potent inhibitor of cancer cell growth. “The wisdom of the whole herb cannot be ignored.” It is recommended to drink 4+ cups of green tea per day. If you are a coffee drinker or not a fan of tea, there are several green tea supplements that we carry. When combined with turmeric or ginger, the anti-tumor properties of curcumin increase threefold and EGCG is increased eightfold.

The caffeine in green tea is a stimulant, but it is complemented by many soothing phytonutrients that take the edge off. “Ironically, removing the caffeine from green tea appears to deactivate green tea’s powerful anti-tumor effects.”

Image result for barberry” width=”225″ height=”338″ />Goldthread is native to China and barberry is native to Europe (naturalized in North America). These two herbs are rich in berberine. Its bright yellow color and bitter taste contain anti-inflammatory and anti-microbial effects. It is a selective COX-2 inhibitor, seen in the constituent kaempferol. Several studies show its anti-tumor effects, including protection against leukemia, skin cancer, and brain tumors. Researchers at the Institute of Microbiology from the Bulgarian Academy of Sciences tested the full-spectrum extract compared to five constituents of barberry. The full-spectrum won out for its anti-inflammatory effect. “There is a brilliance to berberine, but there is greater genius in using… berberine in the context of the full plant.” 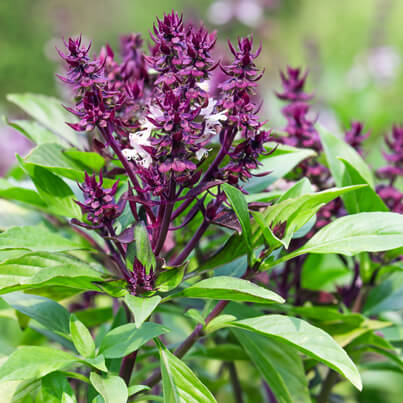 This plant is seen around temple courtyards of India. Its Hindi name, tulsi, means “matchless,” seen by its high status in Ayurvedic medicine. The herb of Lakshmi and Vishnu, these gods represent balance and creation. Native to India, it is now grown in Central and South America for its medicinal properties. Not to be confused with culinary basil (Ocimum basilicum), Tulsi’s botanical name is Ocimum sanctum.

The phytonutrients ursolic acid and oleanolic acid were studied at the Dartmouth Medical School, confirming their “potential anti-inflammatory and cancer-preventing activity related to their inhibition of COX-2.” One French study identified ursolic acid as a “causative agent in the “programmed” cell death of leukemia cells… In addition, there is substantial scientific confirmation that Holy Basil is antimutagenic, radioprotective, possesses significant anti-tumor effects in human skin and increases a key detoxification enyzme called glutathione S-transferase activity.”

Radioprotective refers to the body’s DNA protection from radiation. Sunlight is one type of radiation, the extreme being radiation therapy. Consuming holy basil at tonic levels (smaller doses over long periods of time/compared to therapeutic levels for a short period) is a safe measure to maintain the integrity of our cells. This will not treat but offer protection from radiation. (Think of it as wearing a helmet while riding a bicycle- preventative medicine in action.)

A cousin of ginger, it is of the Zingiberaceae family indigenous to India and southern Asia. The West is beginning to understand its benefits besides a natural food coloring (ie. mustard). Its powerful anti-inflammatory properties are flavored with anti-oxidative and anti-tumor properties. Traditional Chinese Medicine and Ayurvedic medical systems have used it for centuries as a liver tonic and for digestive complaints.

Curcumin directly inhibits the activity of COX-2, from the 1999 article in Cancer Research. The phytonutrients in turmeric inhibit TxA2, which participates in/facilitates angiogenesis (growth of new blood vessels into regions of tumor proliferation). In the previous post on COX-2, arachidonic acid (AA) or Omega-6 metabolism plays a part in inflammatory hormones in the body.

Other ways that curcumin works is by modulating nitric oxide (explained in previous post). It is also anti-ulcerative (like green tea and holy basil), stimulates glutathione, DNA protective, and can be applied topically to skin tumors. (This is a small list of its benefits.)

In Chinese herbalism it is called Huang Qin. Native to parts of Asia and Russia, skullcap is a rich source of flavonoid called baicalein. Korean scientists discovered in 1998 that it stimulates the formation of quinone reductase, an important cancer detoxification enzyme. Research in Ukraine expressed that it inhibits lipoxygenase metabolism of omega-6 (AA). Both baicalein and wogonin inhibit nitric oxide production as well.

At the University of Chicago a scientist discovered that skullcap’s anti-oxidant molecules had the right shape to enter cellular membranes. Antioxidants like C and E are great, but during a heart attack, damage happens so quickly that they can’t get inside the cell walls fast enough.

At the University of Guelph, scientists discovered that skullcap contains melatonin, a hormone produced by the pineal gland and has significant anti-cancer effects.

“We now understand that COX-1 and COX-2 are both necessary in some levels and proportions to support health.”

It is a rhizome like ginger and turmeric. In the west it is called Solomon’s Seal, of the polygonum family. Hu zhang contains a constituent called resveratrol, and is the richest source compared to red grapes and wine. Resveratrol was discovered to suppress COX-2 cancer promotion, restores glutathione levels, and produce free-radical scavengers (Memorial Sloan-Kettering Cancer Center). Hu zhang, as well as turmeric, ginger, and skullcap also inhibit nitric oxide.

As for Rosemarine, I lett it runne all over my garden walls, not onlie because my bees love it, but because it is the herb sacred to remembrance, and, therefore, to friendship. . . . – Sir Thomas More

Native to the Mediterranean and southern Europe, its Latin name Rosmarinus means, “sea dew.” It is used for concentration, memory, and headaches. It relieves rheumatic muscles when applied topically. Like holy basil, rosemary also contains ursolic acid, inhibiting omega-6 (AA) metabolism in platelets. Another of rosemary’s constituents, carnosol and apigenin have similar effects, but cannot be compared to the powers of the whole plant. At Dartmouth Medical School, around eighty compounds derived from rosemary are being used in research for patentable COX-2 inhibitors.

The Ayurvedic medical system refers to ginger as the universal medicine. Confucius wrote that he was never without ginger when he ate. In 77 C.E. De Materia Medica refers to ginger to “warm and soften the stomach,” and was used by emperors Claudius and Nero. The Japanese used it for joint pains, headache relief in the Philippines, toothaches and hangovers in China, etc etc. Wars have been fought over ginger. Modern science has detected nearly 500 constituents. These facts alone will have you thinking differently while consuming ginger ale or The Dirty Mayor.

Many of ginger’s constituents inhibit COX-2 and 5-lipoxygenase metabolism of AA (eugenol). Ginger also inhibits the creation of prostaglandin PGE2, it balances production of inflammatory prostaglandins and restores platelet function by inhibiting thromboxanes. It has powerful analgesic and anti-ulcer effects, contains melatonin, has 180x more protein digesting enzymes than papaya, etc etc. Of the many constituents, curcumin and kaempferol are also found in ginger.

One of its compounds, rosmarinic acid (also present in rosemary), reduces platelet stickiness (in the previous post we discussed cancer cells proliferating when they stick to platelets). Products like Celebrex or Vioxx do not have the ability to reduce platelet aggregation (stickiness) and at the same time increases the risk of clotting. Another interesting aspect is that rosmarinic acid has the ability to cross the skin barrier and go directly into the bloodstream. This will be discussed in more detail next week!

Native to England, it has been used in teas for fevers and depression, and has the evidence from Louisiana State University that it works against inflammation. Feverfew, along with ginger and skullcap, are one of the highest botanical sources of melatonin. It also contains apigenin, a flavonoid present in rosemary and German chamomile. Feverfew is also a migraine preventative, discovered in a double-blind study at London Migraine Clinic. Cousin to the marijuana plant, it is the same ingredient that flavor beer and ale. Often combined with valerian and chamomile, it eases an anxious person into a comforting sleep, quite contrary to a hopping sensation (bad joke here). Hops actually comes from the old English term for climbing, referring to the hops growing habit.

In 2000, research at the University of Tokushima, Department of Biochemistry, School of Medicine in Japan discovered a hops constituent “humulone” demonstrates COX-2 inhibiting effects. A hops bitter, humulone inhibits the body’s re-absorption of bone, which is good for people concerned with diminishing bone density, bone loss, and damaged arthritic joints.

Hops not only inhibits COX-2, it strengthens bones and promotes mental peace. These feminine fruits provide a plethora of goodness. Used in the Ayurvedic medical tradition has been used for thousands of years to promote mental clarity and brain functioning in the elderly. It is known for its anti-inflammatory properties and relief of mental fatigue. It is one of nature’s richest sources of asiatic acid, an inhibitor of Abeta plaque formation. (Learn more about Abeta plaque & its relationship with Alzheimer’s disease in next week’s post.)

Gotu Kola’s other benefits include its ability to stimulate collagen formation. Collagen is a protein that is the main component of connective tissue and works in certain would healing processes. It not only works as a preventative but for healing as well. Fun fact: Elephants, known for their long life span, eat this plant regularly. China uses it for enhancing longevity, depression, fevers, leukorrhea, boils, fractions, contusions and strains. India uses it in cases of leprosy, lupus, psoriasis, general wound healing, and is considered a brain and nerve tonic.

Next week we will wrap up the COX-2 series and also discuss transdermal herbalism & aromatherapy.